Skip to content
The Rome airport was in chaos because of a fire. Our one-hour flight to Catania in Sicily, where Glenn and I were to begin a two-week tour, was cancelled and we were unable to rebook by computer or in person. Our only alternative was to take the train, a ten-hour journey. 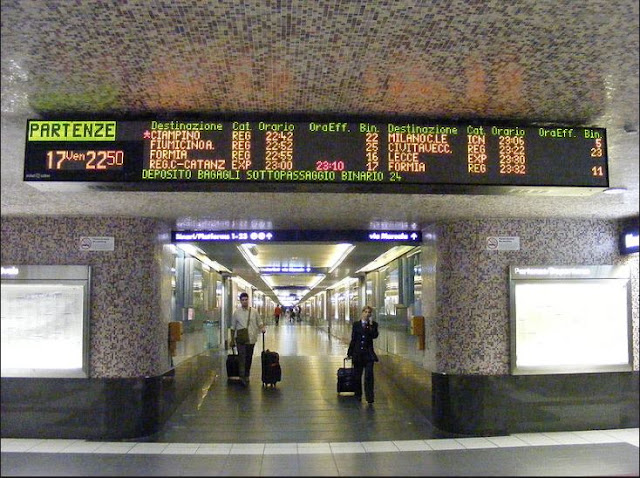 After fruitless efforts to book on-line, we headed to the crowded and pickpocket-ridden Stazione Termini to get tickets from an agent who could advise on schedules. But when we saw the number 578 on the slip from the take-a-number machine, there was nothing to do but confront the row of hostile vending machines known to eat victim’s credit cards and refuse to produce tickets. Many were “guasto,” the ubiquitous word for “broken” or “out of service.” I found one that appeared to work and gingerly stuck my credit card in the slot. A whirring noise and two tickets for Catania and my card miraculously appeared. 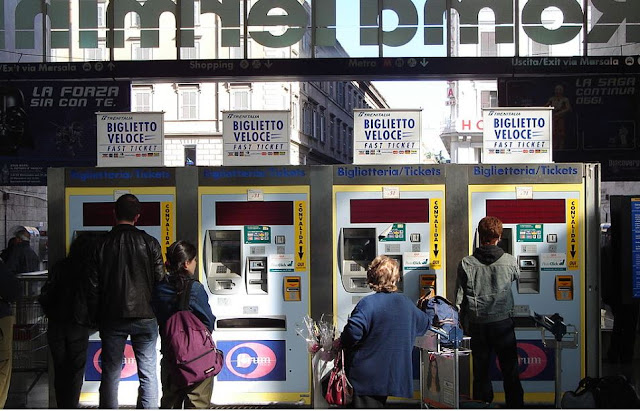 The next day we dragged our luggage to the station to find our carriage. It had an old-fashioned arrangement for second-class trains: three seats facing one way and three the other in a compartment with a sliding door opening onto a corridor.
It didn’t take long to find out who our companions for the ride would be when a huge African man dressed in a blue tunic and trousers looked through the door and then down at his ticket. He entered, hauling a folding trolley and two bulging plastic garbage bags and heaved them up on the luggage rack above the seats before sitting knee to knee opposite Glenn. Then a young man with an Adidas sports bag plopped down. My opposite number entered: another young man but with a dog in his arms. The animal was about the size of a small terrier and bald except for tufts of hair on the top of her head, end of tail and around the ankles. The bald part was pink with black polka dots. The young man was beaming with pride but his pet hid her wistful face in the man’s jacket. I wondered if it was from embarrassment at her appearance. 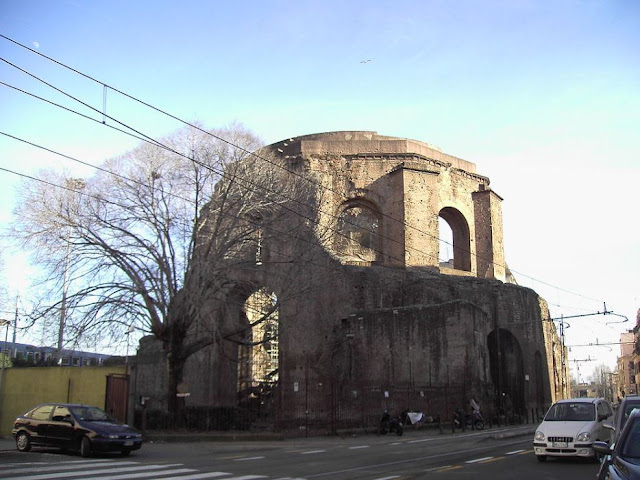 As the train glided out of Rome, past the ruined Temple of  Minerva Medica and crumbling aqueducts, the compartment door slid open and our last companion arrived: a man with receding hairline, a grey ponytail, flowered shirt, and gold bracelets and necklace.
When you are stuck together with other travelers for ten hours on a train with no restaurant or bar car the only thing to do is talk. Everyone introduced themselves. The man with bundles was a Senegalese street vendor who spoke Italian and French as he talked about his family left behind as he sold knock-off handbags on the streets and beaches. The dog man told us about his timid Chinese Crested dog; the man sitting next to Glenn was a lawyer from Catania, also stuck on the train because of the airport fire and subsequent cancellations. One of his conversational offerings was his name, Gaio. Although the female equivalent, Gaia, Earth goddess, is common, the masculine equivalent is nearly unknown. (I thought his mama must have known how good-looking he would be because he did indeed look like a god.) The man with the ponytail was originally from Uruguay now living in Parma and on his way south to visit his Italian mother. He entertained us with stories of his recent heart surgery after we admired his scar. We volunteered some about our past years living in Rome before asking why there was no bridge to Sicily. The two Italians responded with shrugs and mumblings about corruption.
And so the time passed in conversation conducted in three languages as the train chugged through economically depressed southern Italy, a land where much of “what might have been” is evident with every crumbling and empty factory, fallow field, and one-story house with the rusting re-bar for a never-built second story protruding vainly into the sky. So much beauty in the landscape, so difficult to earn a living.
Eventually the Senegalese gathered up his goods and got off. Instead of making the expected remarks about street vendors, who are widely seen as a nuisance, the other three began to discuss the tragedy of economic conditions in Africa that forced men to emigrate to support their families with menial work in a foreign country.
The train finally reached the Straits of Messina where it was loaded section by section into the bowels of a ferry. 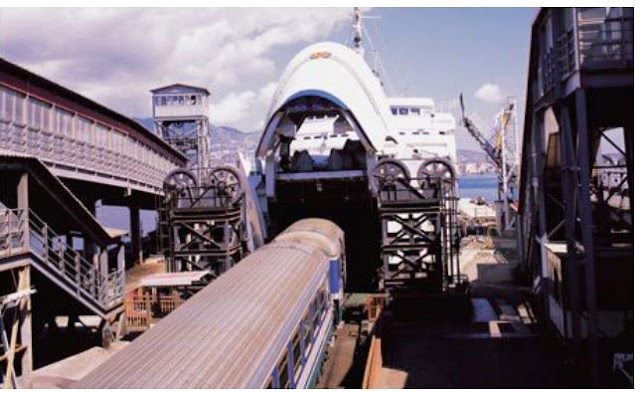 After a half hour in the dark, we emerged in the city of Messina with a small sense of bonding with our fellow travelers, who we would never meet again, and a large appreciation for the empathy of Italians who recognize the struggles of so many desperate migrants washing up on Italy’s southern shores.

All photos from Wikipedia Commons