Skip to content
One Easter I went on a voyage to bring a friend’s boat, the Virginia, to Corfu, Greece from Bodrum, Turkey where she had been resting in dry storage for the winter. Not being much of a sailor, I needed encouragement before agreeing to serve as third mate. A tour of Cappadocia and the chance to check out carpets were the enticements. I helped pack up food stores and a new rubber life raft. My husband and I flew with the owners to Athens and on to the island of Kos where we had booked a hotel unfortunately populated with drunken and naked Finns desperate for sun. Alongside their more shapely grandchildren, aged and fat grandmothers lay by the pool without clothes or concern, looking like basking sea lions. We tried hard to look the other way but we couldn’t resist surreptitiously staring as each movement redistributed their jiggling flesh.
It was Orthodox Easter. We attended a midnight service and afterward watched as the populace took their beeswax candles home where the smoke from the burning wick was used to make the sign of the cross on door lintels. The following day we enjoyed a lamb barbecue at the port before we took the ferry to Bodrum, leaving the Christian world for that of the Moslem. The departure timing was fortuitous because the next day the ferry caught fire coming into port. No one was injured but the thought of a choice between roasting and drowning wasn’t one I wanted to contemplate. 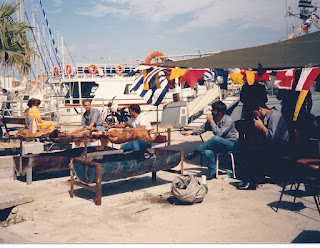 Before the Virginia was returned to her natural element we rented a car to tour Cappadocia in central Turkey. Our route led us past gas stations with a small mosques attached and towns with groves of poplar trees shooting their fresh green leaves high in the sky. Crumbling caravansaries served as picnic sites where  children begged for money calling out, “pourboire,” French for a tip. Heavily guarded opium poppy fields, grown for pharmaceutical purposes we assumed, colored the landscape with their purple flowers. At one stop when Glenn gave a candy to a little girl her friend came rushing up to remind her that it was Ramadan. She quickly spit it out and put it in her pocket to savor after sundown. 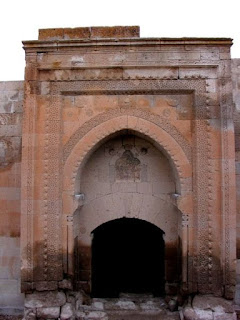 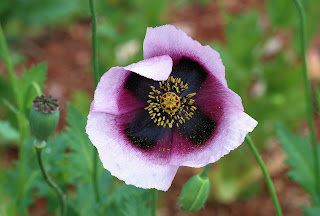 We arrived in Isparta seeking shelter for the night. Looking as confused as only tourists can we were rescued by two men in a car who pulled up beside us to say hello. We said, “want hotel” while I held up my four fingers to illustrate that we wanted something nice. The driver smiled and waved us to follow him. He drove up to a brand new otel and pointed before he drove off with a wave.
It was luxurious. As we checked in local army officers arrived in their staff cars with flags flying from front fenders. They were gathering for a Rotary Club meeting, Americana in an unlikely location. The hotel restaurant was taken over by the Rotary. The hotel staff pointed us to a restaurant several blocks away. All eyes turned in our direction when we entered. Smiles followed and the cook invited us into his kitchen where we pointed at what looked good. Various tasty combinations made with tomatoes, eggplant and lamb soon filled our plates. The restaurant was crowded with the local soccer team. A man motioned to us to sit with him at the only table with space. He was an engineering professor with good English and was happy to talk about his view of the challenges and opportunities for the country. Returning to the hotel we fell asleep to the sounds of a Stravinsky concert on the radio and awoke to the sound of the muezzin calling the faithful to prayer.
Photos and statues of Kemal Attaturk, founder of the modern Turkish state, watched us as we drove through towns. Veiled women on tiny donkeys rode by. In the countryside we passed arched Ottoman-era stone bridges, tractors heading for the tobacco fields with women in flower-patterned bloomers sitting on the wheel covers, and packed buses and trucks speeding down the roads on the way to who knows where. The roadside was dotted with nomads pursuing their never ending travel. Some were camped in black goat hair tents with their caravan camels tied up and babies slung in cradles hung from tripods, a scene unchanged for millennia.

Cappadocia was like an ancient Disneyland with strange rock spires, rock-carved churches where the sides had fallen away leaving the 9th and 10th century Byzantine frescoes open to the elements, and luxury hotels set among and even within the soft rocks. Some of the tall rocks, called fairy chimneys, were topped with what looked like a boulder, making them look somewhat obscene. We entered one of the underground cities, this one eight stories deep; some are said to have eighteen stories sheltering up to 20,000 households from pagans in the troubled times when the Roman Empire was collapsing. How they and their animals could have survived such conditions was incomprehensible. The layers  of caves and air shafts remain monuments to an indomitable will to live despite the odds. 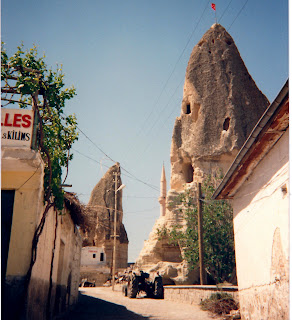 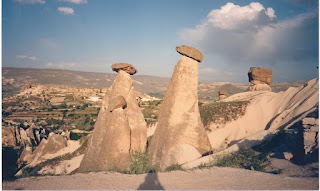 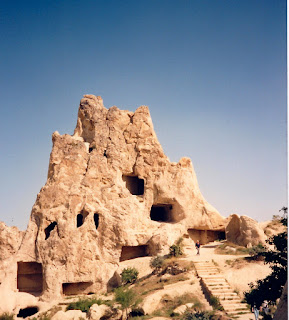 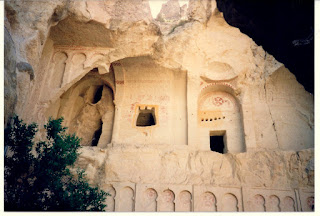 We returned to Bodrum, where a Crusader castle overlooks the harbor. Once the city was the site of one of the Seven Wonders of the World, the Mausoleum of Halicarnassus, long lost to time.  My sense of history’s weight was sharpened even more when I learned that the Greek, Herodotus, the Western world’s first recorded historian, was born there in about 484 BC. His History is unrivaled for his humane view of “barbarians,” non-Greeks, and his belief that the gods can warn mortals but do not prevent their follies and the punishment that follows, a concept that seems to have been forgotten.
Our boat owners had a Turkish friend who sold carpets, always a temptation since we both suffer from carpet lust. We were mesmerized and soon succumbed when he dramatically snapped open carpet after carpet, rolling them out one on top of the other for our inspection while we sipped mint tea. His feminine-appearing brother, willowy in shape and missing the ubiquitous thick Turkish mustache, brought out other treasures: a heavy Kurdish copper teapot decorated with round knobs, fancy skewers and embroidered camel harnesses. Without putting up any resistance we bought everything we could carry and stowed our treasures as ship’s stores well out of sight of Italian customs officials. 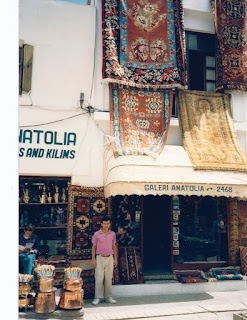 When we walked along the harbor we could see the traditional two-masted wooden sailing boats, gulets, rocking at their moorings while their captains awaited customers for day sails or a week along the inlet-dotted coastline. Some idly smoked on the awning-shaded sterns strewn with carpets and cushions. The red Turkish flags with their white crescent and star flag fluttered in the faint breeze. 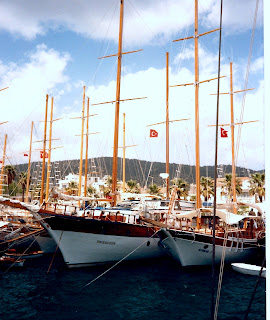 The Virginia was lowered back into the water and it was time to cast off. We slowly sailed toward Italy in choppy waters. Needing to get back to work, I walked the plank at Paros, an island famous for its quarries containing pure white semi-transparent marble used by ancient Greeks for their sculptures. Standing on the dock and watching my shipmates sail off made me feel like I’d been shipwrecked, even though I would fly home the next day from the tiny airfield via Athens. The owner of the small hotel where I stayed kept his eye on me. What he thought I was doing alone was unclear, but whatever he thought it was, he didn’t approve, scowling every time he saw me. I was shopping and visiting the Byzantine Church of the Hundred Doors, said to have been founded by that great traveler, Constantine’s mother, St. Helena. She stopped on the island on her way to the Holy Land in search of the True Cross, pieces of which are in reliquaries throughout Europe.
Italy’s boot appeared far below as I flew back to Rome. Two weeks later Glenn returned home via a rust-bucket Greek ferry from Igoumenitsa to Brindisi and then by overnight train. His watchcap was worn on a rakish angle, he needed a shave and his seabag was filled with dirty laundry. My first mate was home.
Share this: