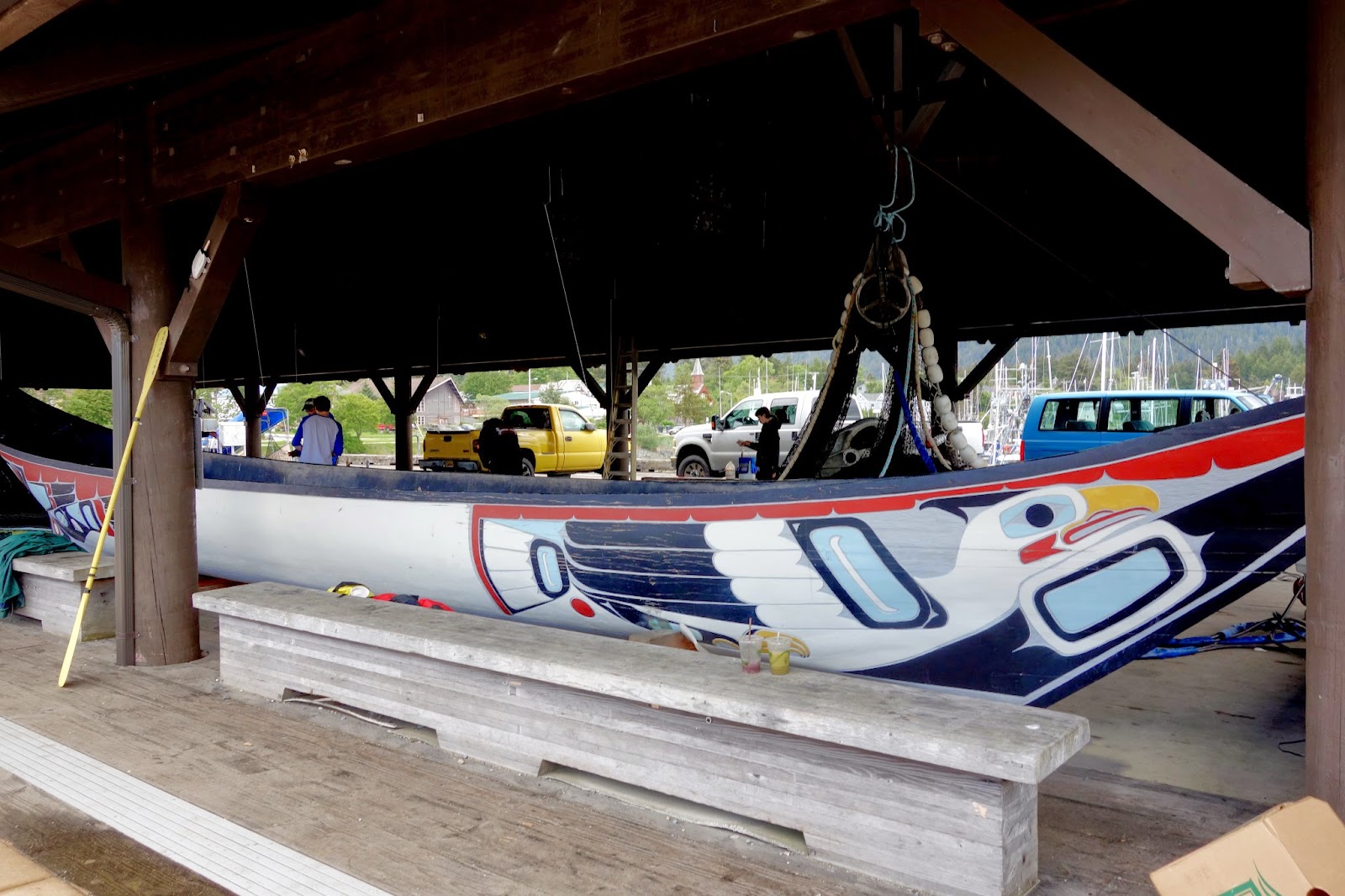 Sitka is a small town with a big history. There has been human activity for the last 10,000 years when it was settled by the Tlingit people, but is best known to American history students as the capital of Russian America. The Russians arrived in 1799, naming their fur trading outpost Fort Saint Michael. The Tlingit managed to throw them out in 1802, but not for long. Alexander Baranof, the Russian governor, won the Battle of Sitka in 1804 and renamed his nascent town New Archangel. In 1804 it was named capital of Russian America, which comprised all of Alaska and a fort near Bodega Bay (Fort Ross) and plantations south of the Russian River in California. When the Russians were forced to sell off Alaska in 1867 due to financial woes, Sitka was the site of the signing of the Alaska Purchase.
While my husband went in search of sea otters and other wildlife, I spent day in search of memories of Russia. I did not have to look far. The National Park Service maintains the Russian Bishop’s House, completed in 1843 as an ecclesiastical palace, New World style. It includes the first bishop’s personal residence and chapel along with a seminary and native school. 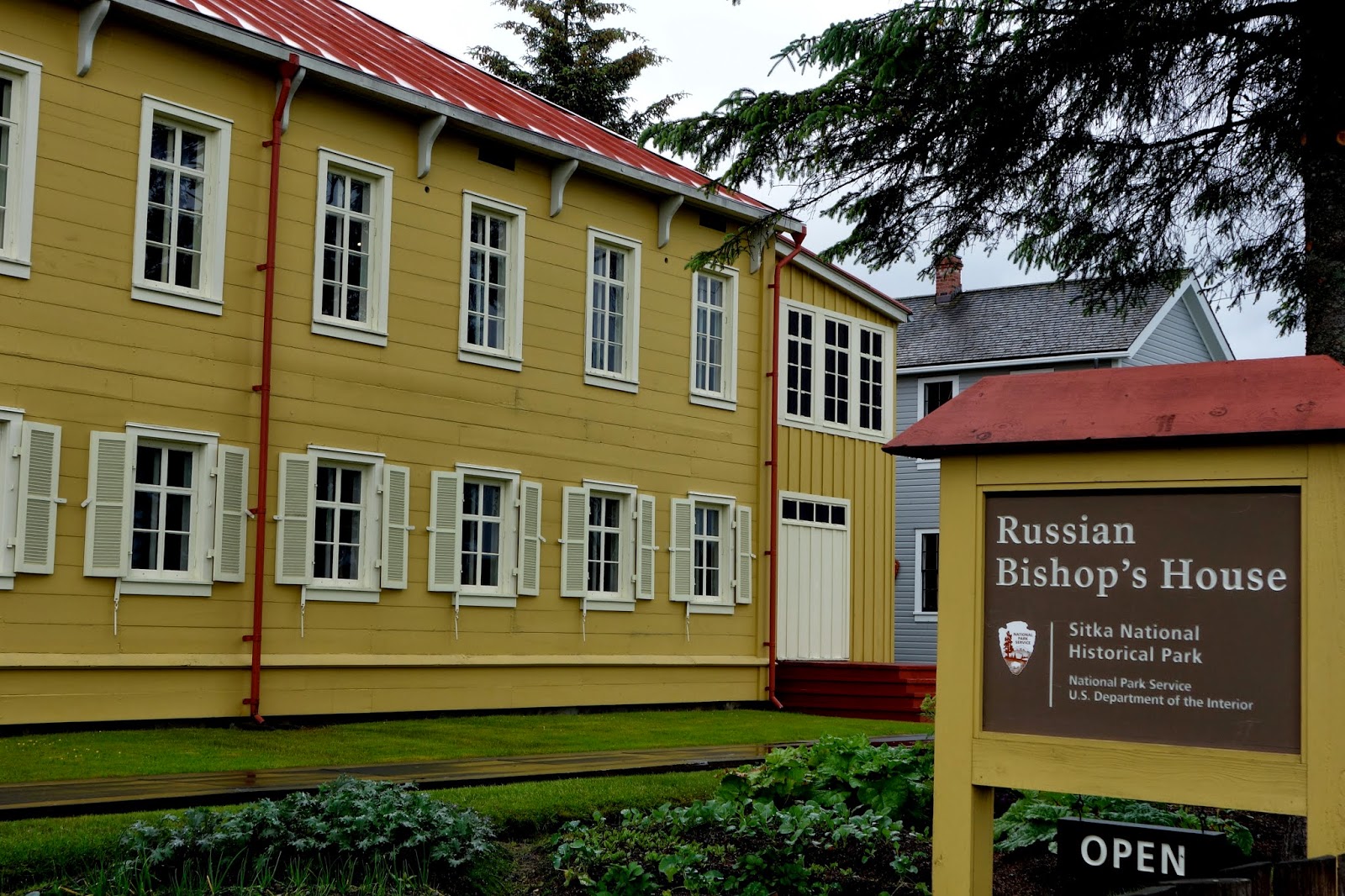 A portrait of the czar presided over Bishop Innocent and his samovar when he entertained dignitaries: 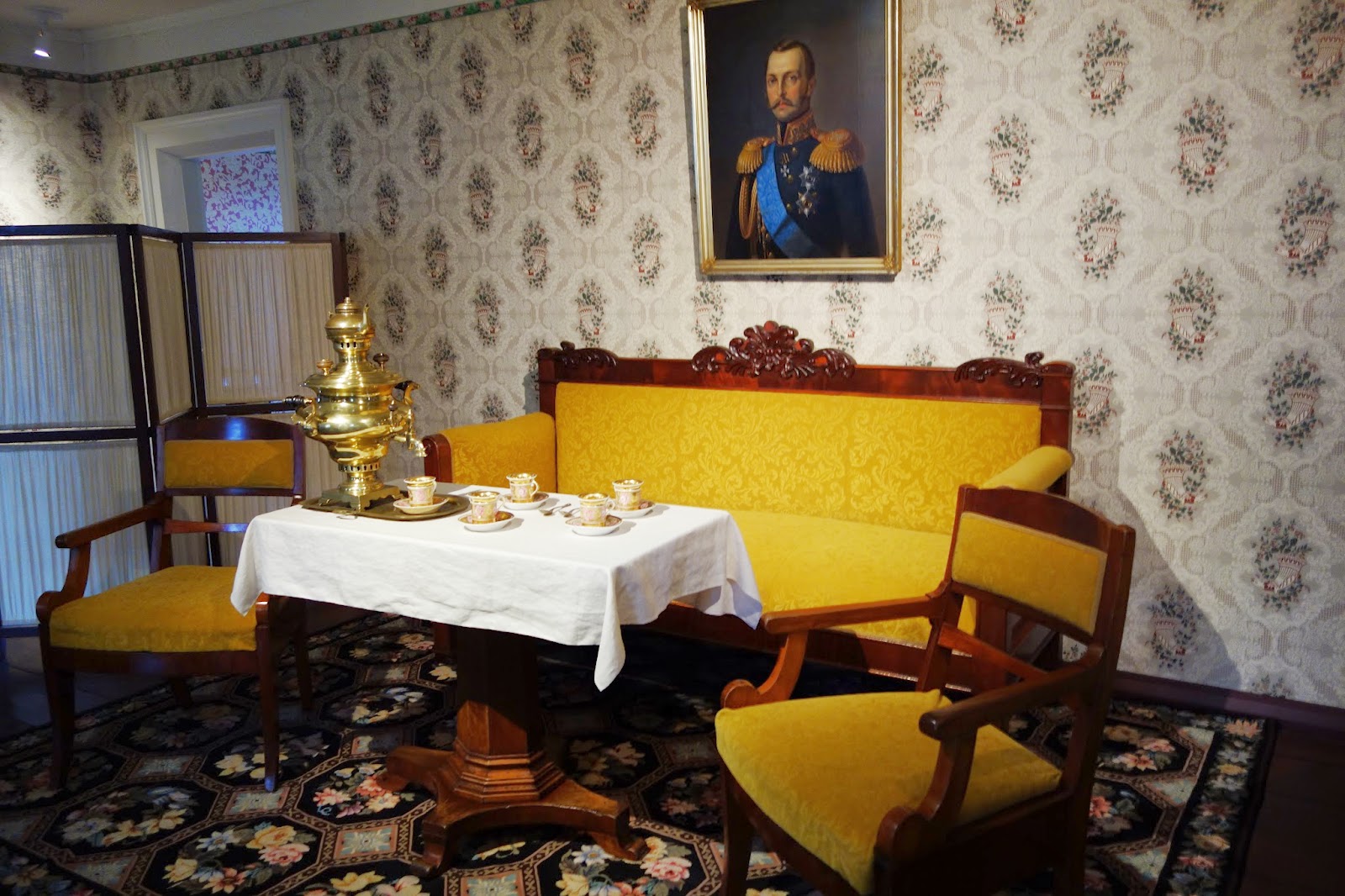 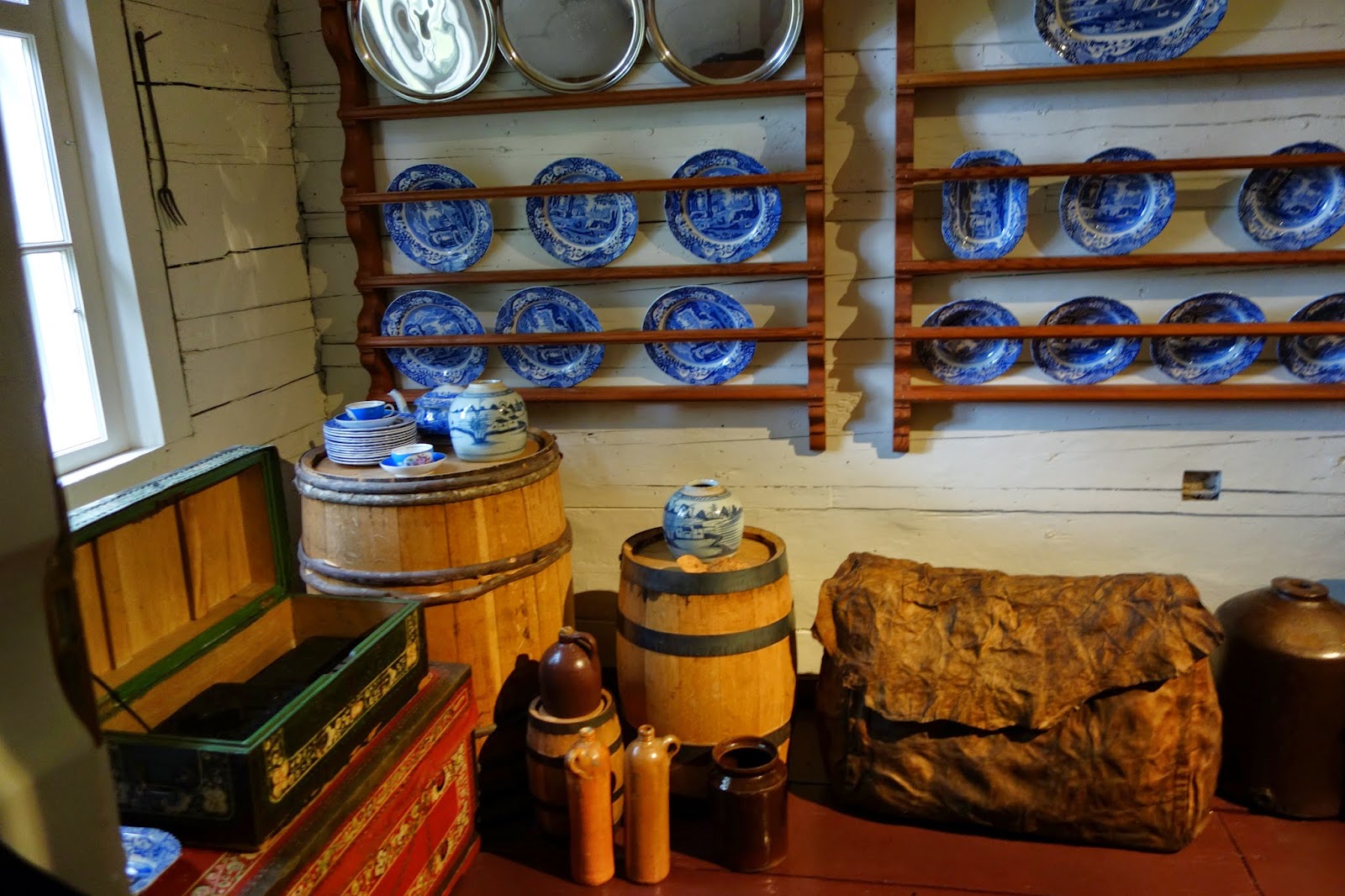 Russia’s interest in the coastal areas of Alaska was mainly limited to the trade in sea otter pelts, the most valuable of all furs. When the population of otters was close to extinction, the Russians drifted home. A leftover pelt was draped over a bench in the Bishop’s house. The Park Service tour guide asked if I wanted to try it on. Of course! The fur was soft and dense, and very heavy. It wasn’t hard to imagine Russian aristocracy wearing their sables and otter furs as their horses dashed through the snowy countryside. 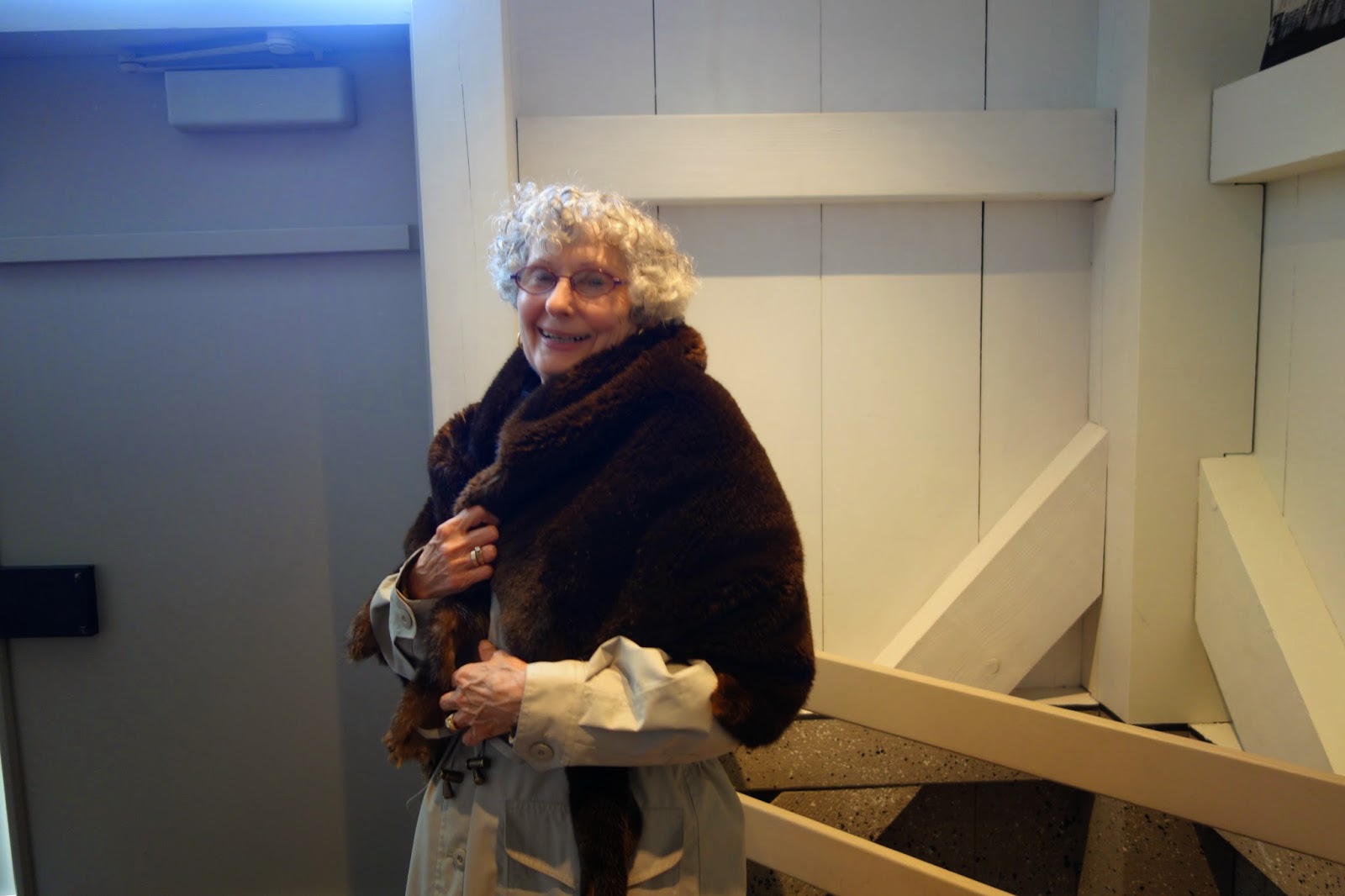 Not all Russians made it home alive. The dark and overgrown cemetery is a melancholy reminder that life in the vast wilderness territory was tenuous. Some of the headstones are made of ship’s ballast. 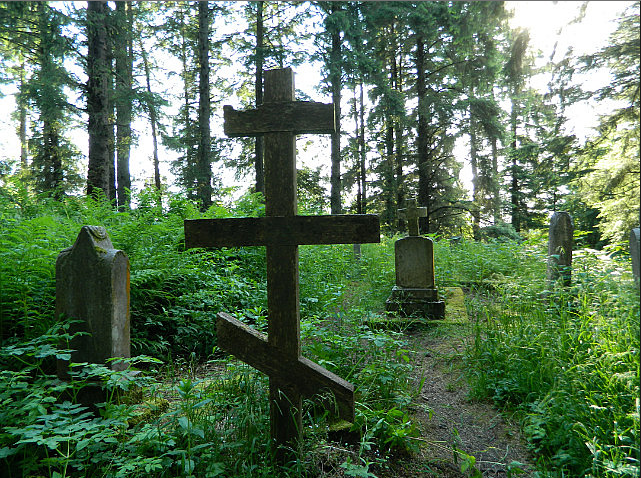 The lovely Russian Orthodox church is in the center of town: 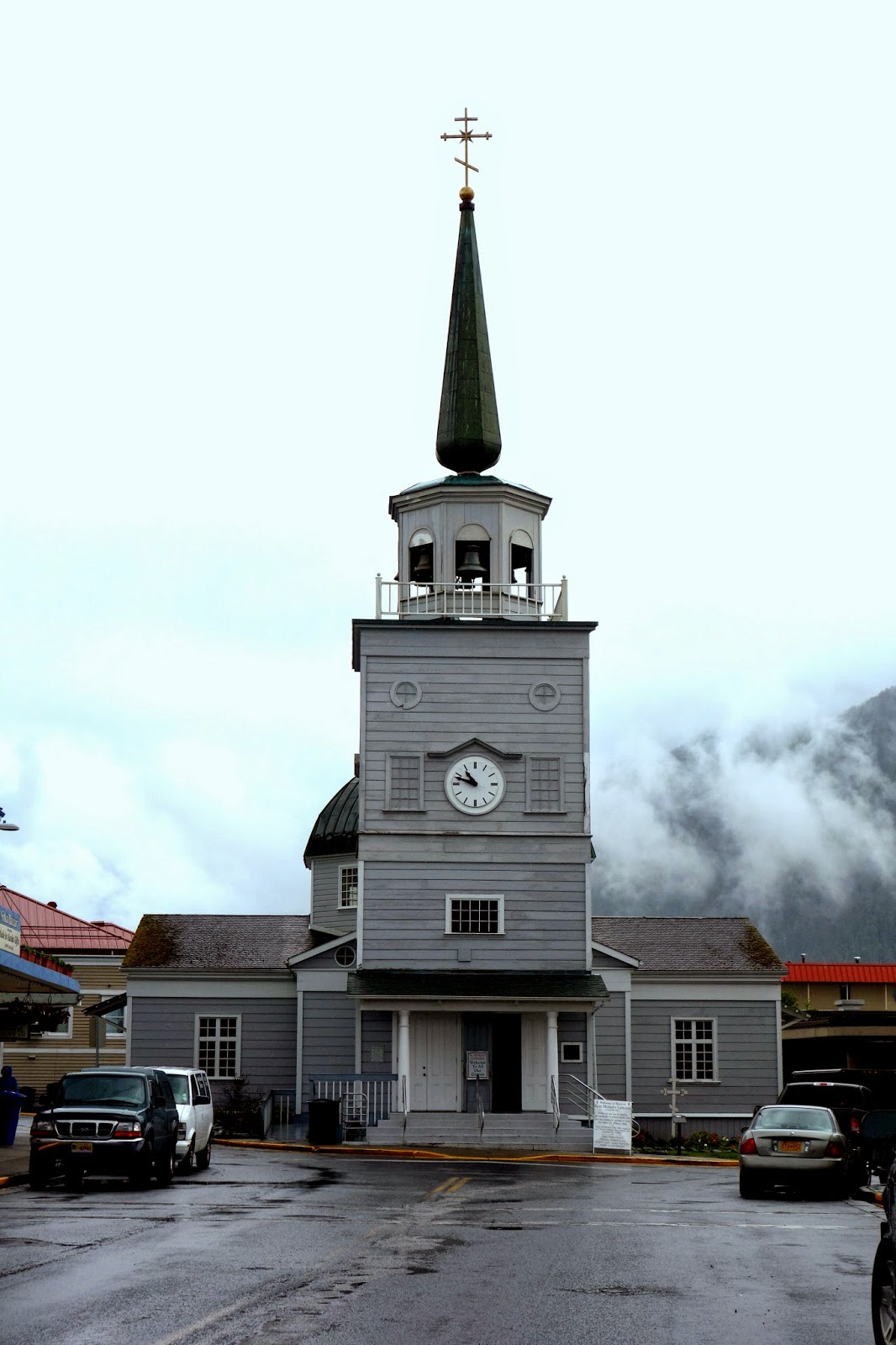 Built in 1848, the cathedral was nearly destroyed by a fire in 1966. The priceless icons, enormous chandelier and other church furnishings were saved, and the church was rebuilt to the same plans. 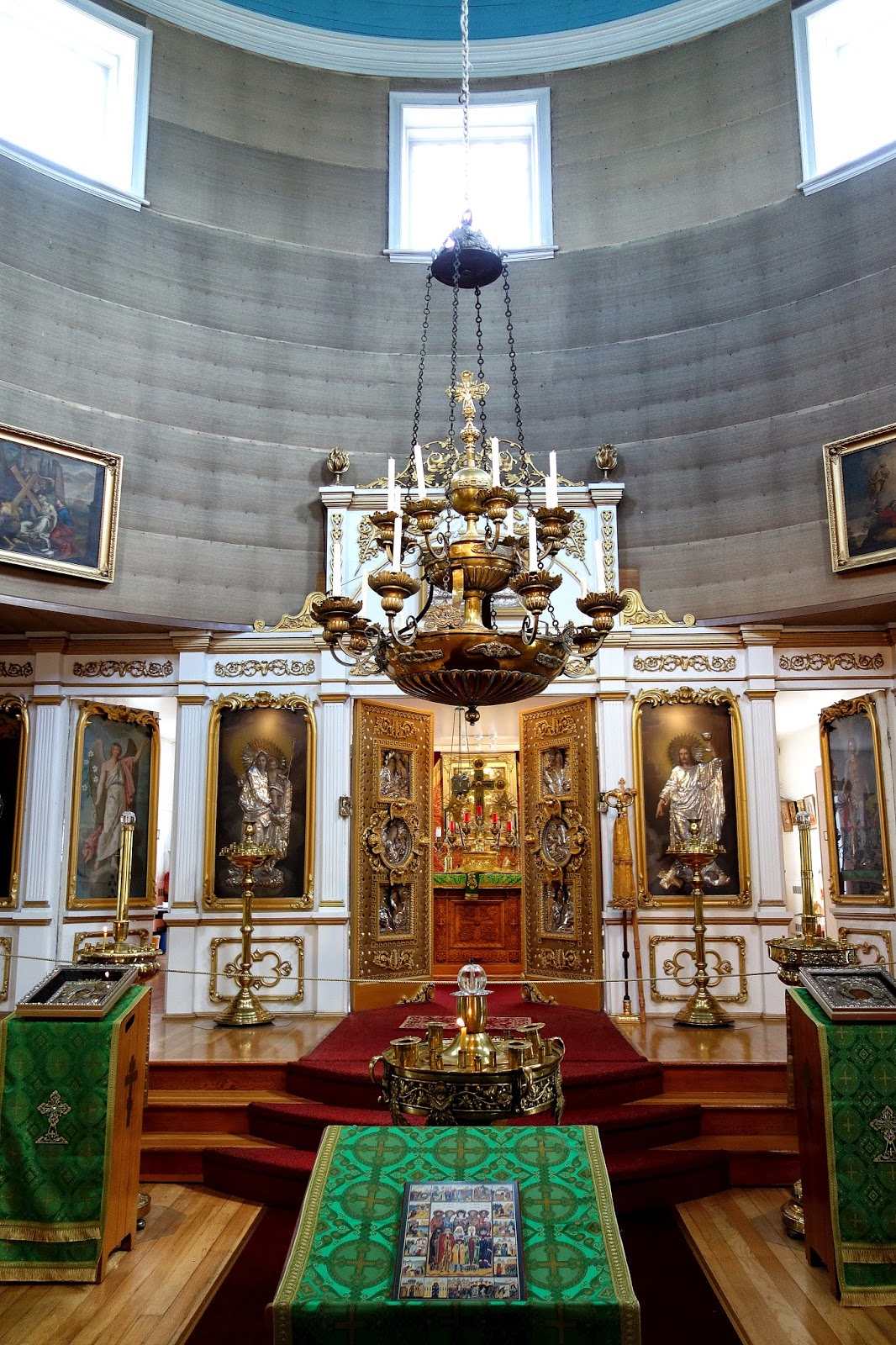 A Native American priest welcomed me. I told him I was waiting for a friend who is the bell ringer. Near noon, she and I climbed the 58 steep steps to the top of the bell tower where all Sitka listened to her short concert played on eight bells. 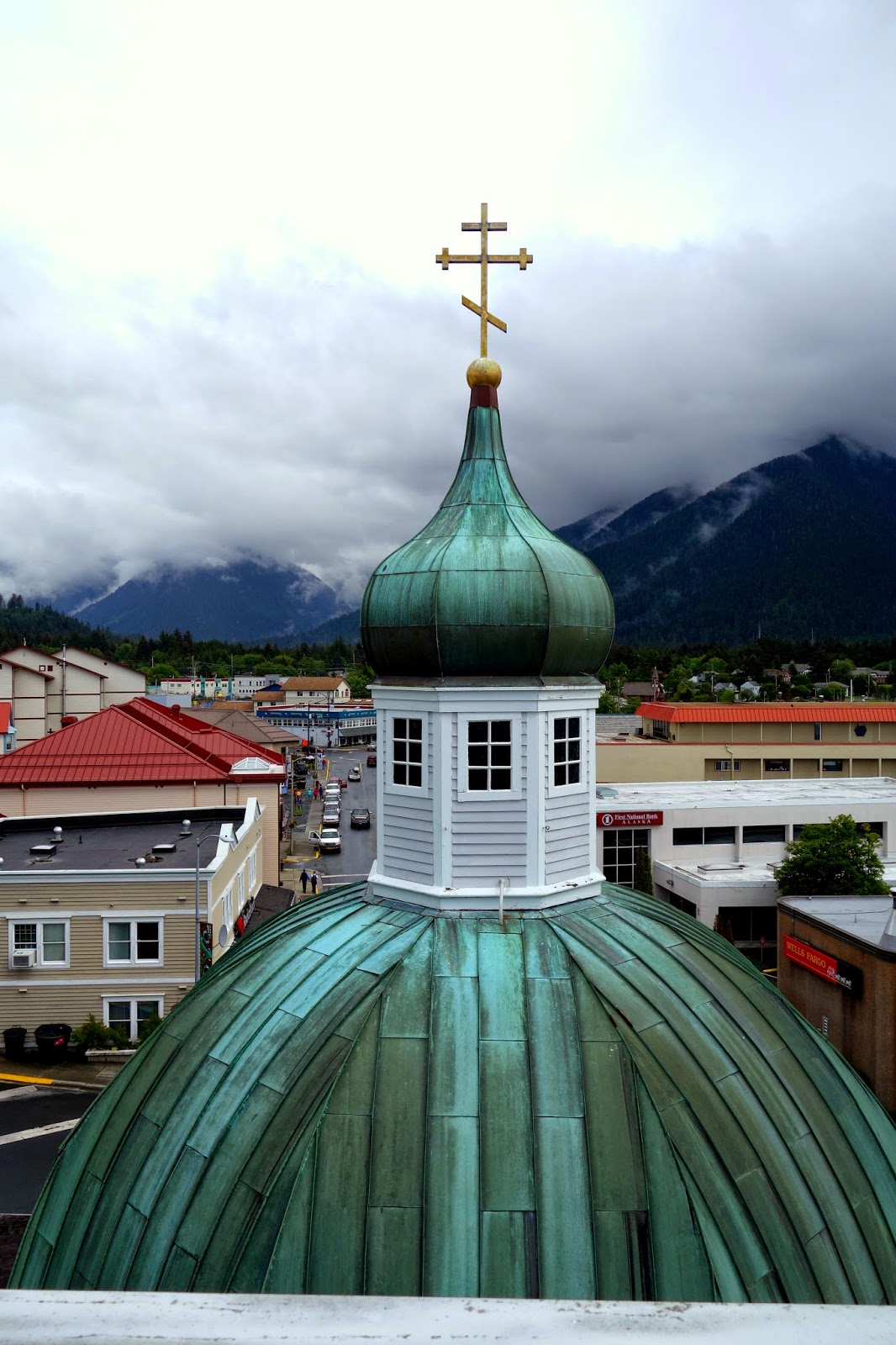 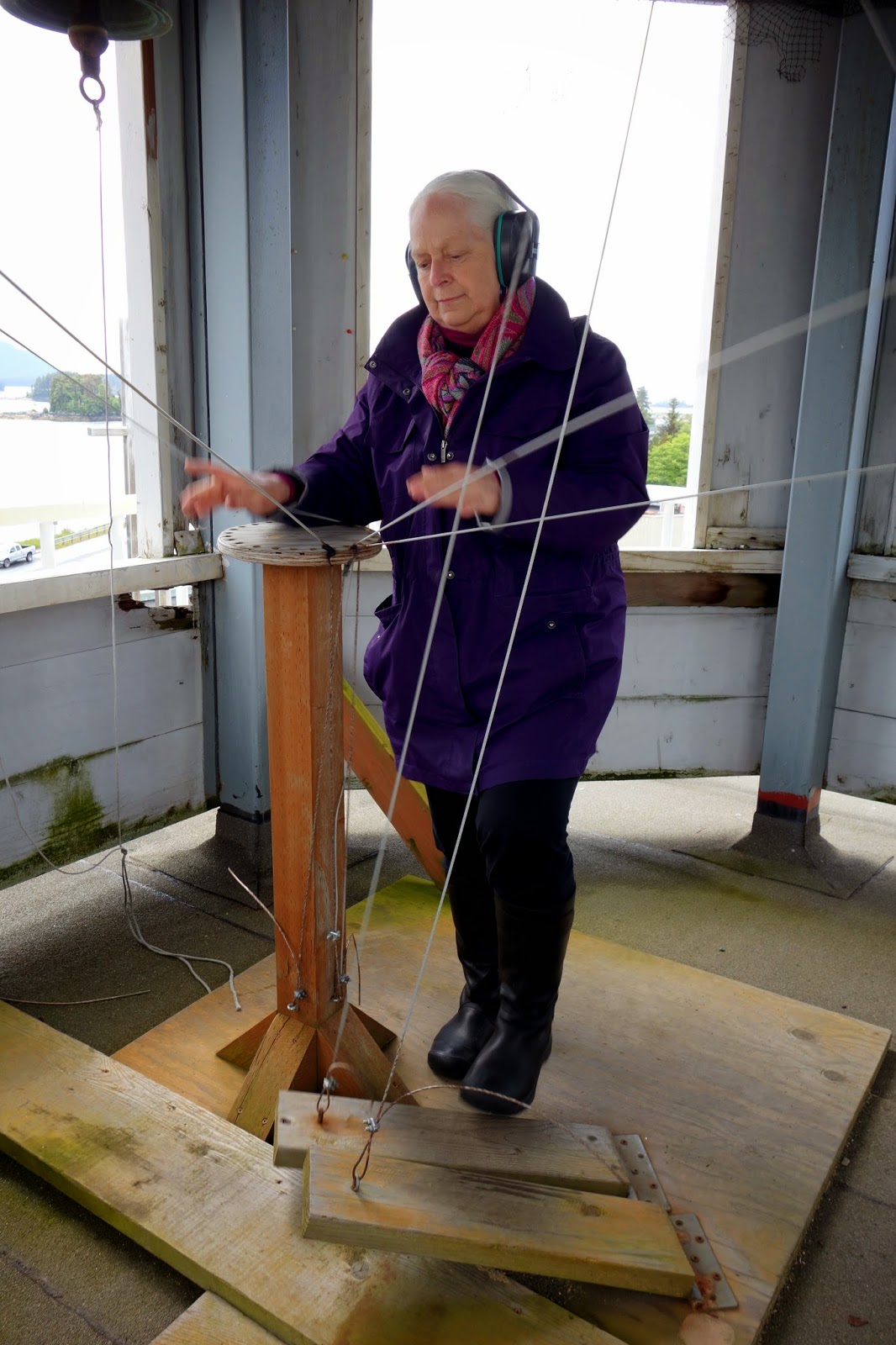 You can watch and hear the music recorded on what looks like a cold and wintery day when she hosted a group of visitors. 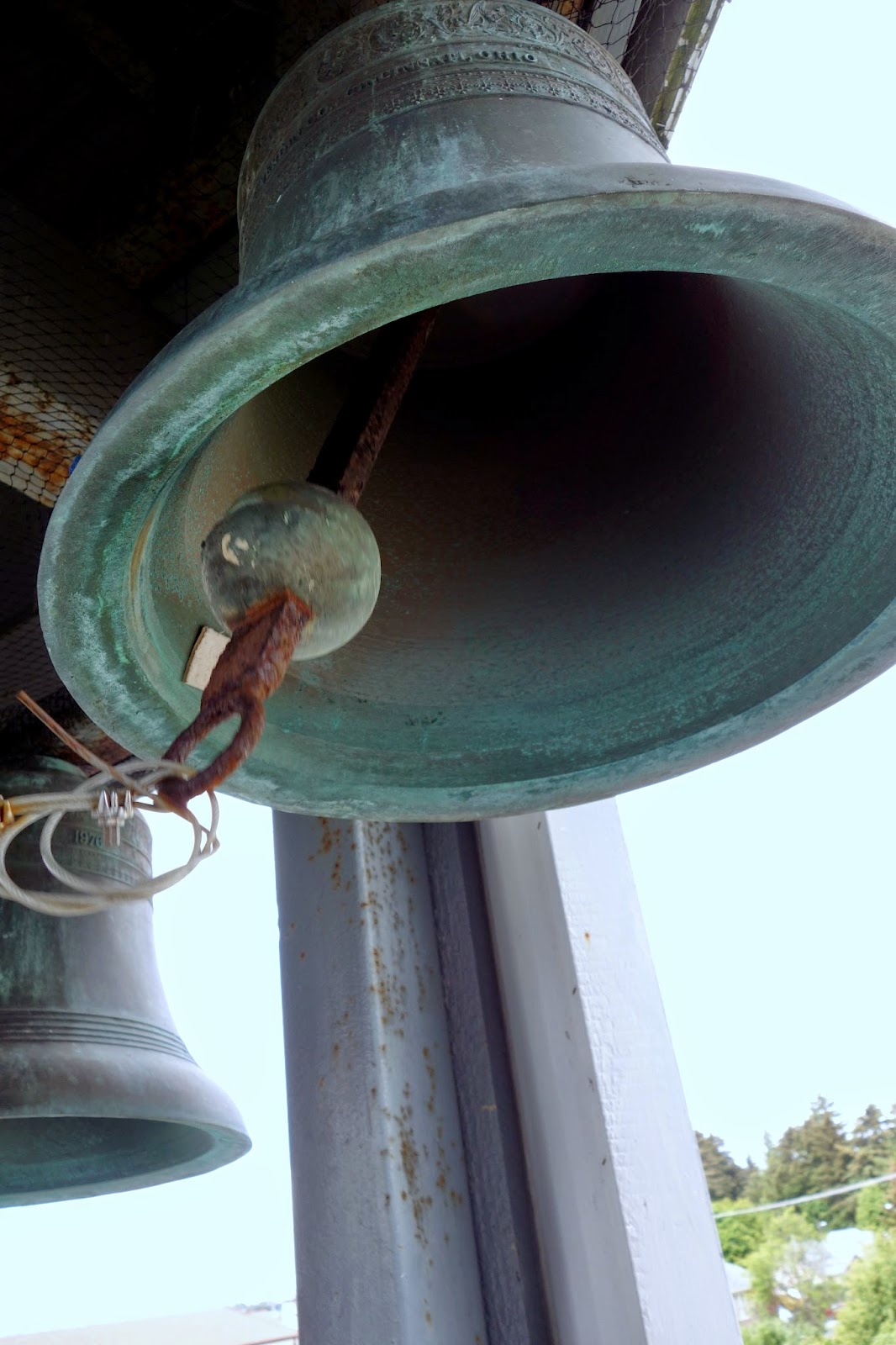 My stereotyped view of the locals was upended when I had a quick lunch at the Homeport Eatery which provides coffee, baked goods, a pub, creperie and organic wine bar for citizens and tourists. A rough and ready type wearing rain gear and rubber boots bellied up to the bar to order a kale smoothie and a veggie crepe. Apparently real men are different in Alaska. 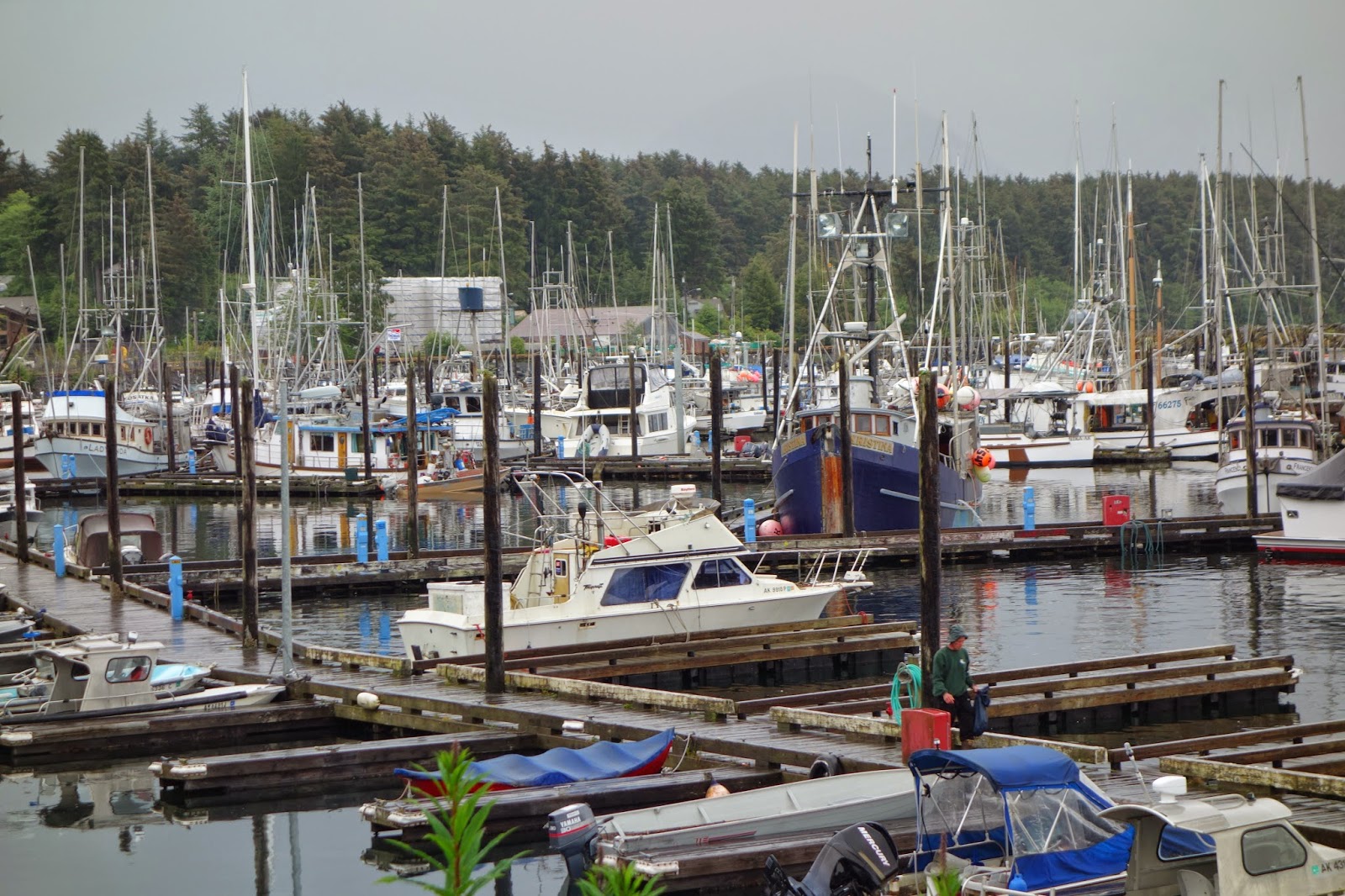 The last part of my tour was several of the many art galleries in the small town. My favorite was the Rose Gallery next to the Bishop’s House. It is filled with exquisite local art and walrus tusk ivory carvings by natives who live on islands in the Bering Sea. I purchased several fine woodcuts by Eric Bealer who lives in a tiny village on Chichagof Island, north of Baranof Island where Sitka is located. 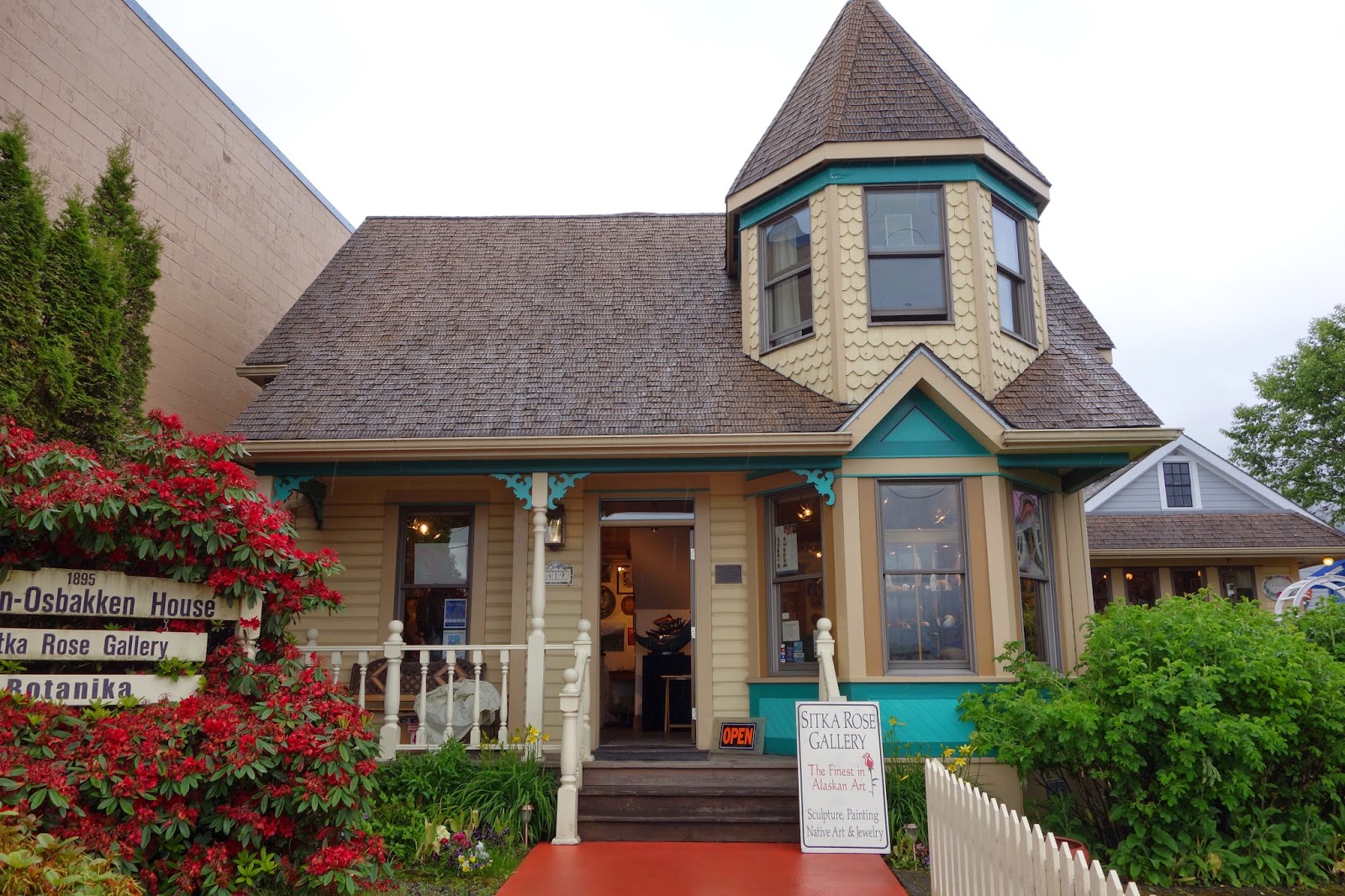 Sitka has an annual music and arts festival running in the summer. We are already making plans to return to see more wildlife, sample native jazz and other enticing offerings. 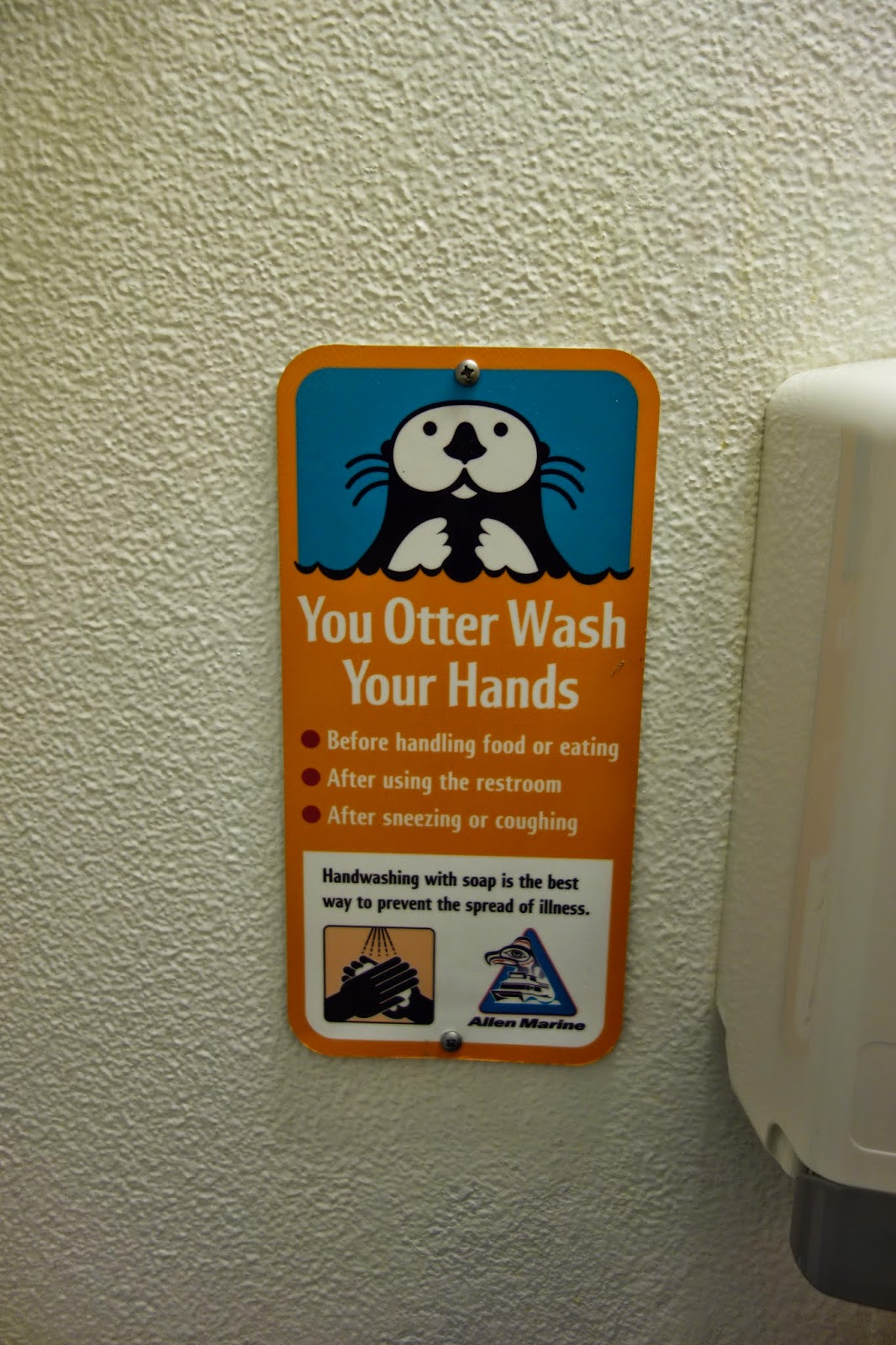 All photos copyright Judith Works, except that of the Russian cemetery taken from photos on Bing.
Share this: